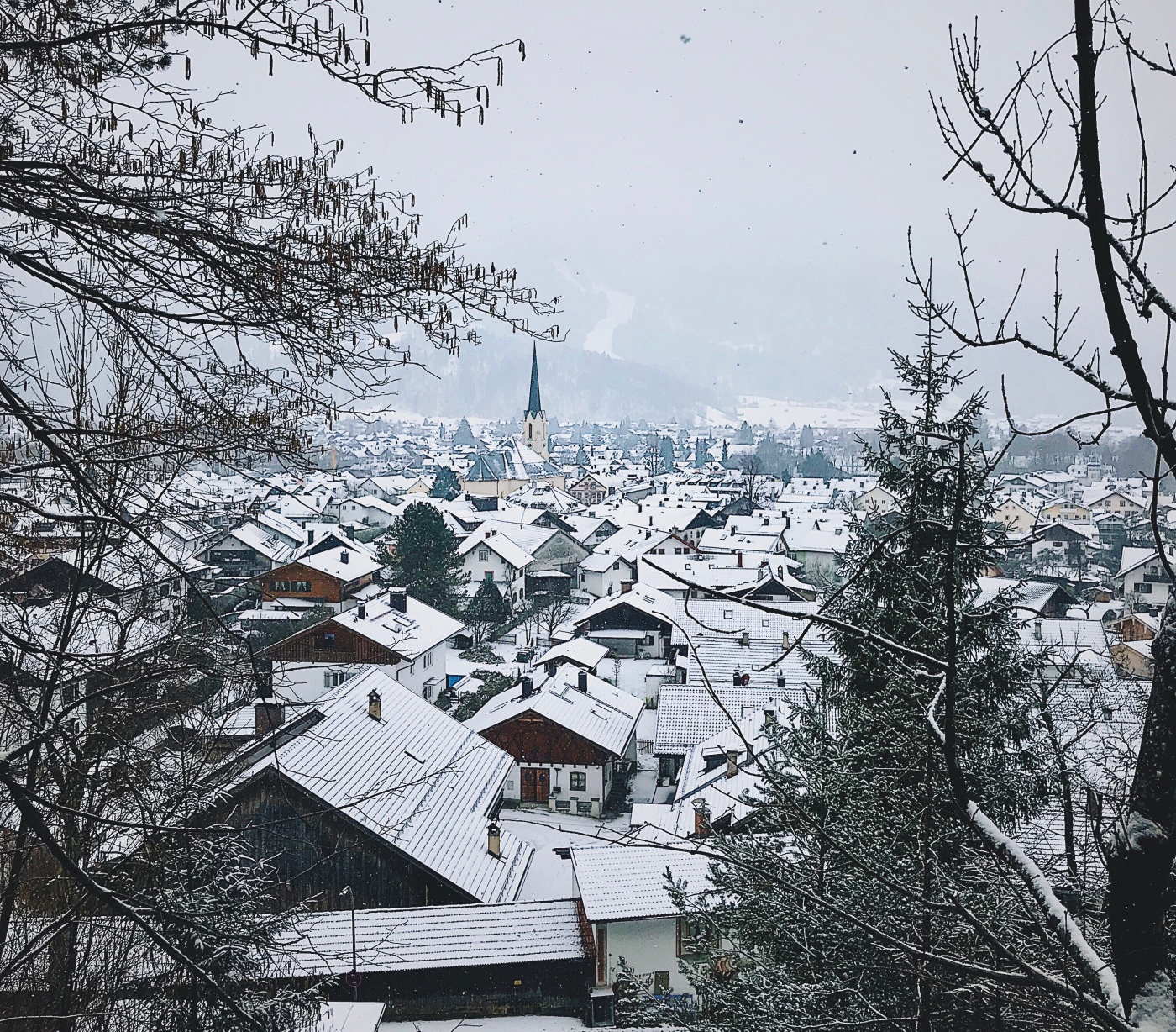 I should say, the best place to stay that Riley and I have found so far, however, that title is far less effective as clickbait. Riley has been to many places in the south of Germany, we’ve visited a few together (more to come in the future, no doubt) but there is one place that has called us back again and again.

For its fantastic location, variety, accommodation, and things to do, you really can’t beat the charming town of Garmisch-Partenkirchen that lies south of Munich. This German ski resort in Bavaria has everything you need from home comforts in the more fashionable area of Garmisch, to the a taste of traditional Bavaria in Partenkirchen. 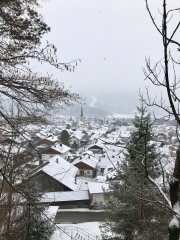 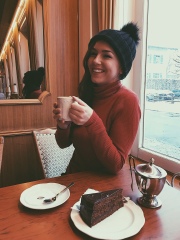 Processed with VSCO with p5 preset

The town was formed originally from two that were united; the town of Garmisch (in the west) and the town of Partenkirchen (in the east), in 1935. This came about as the mayors of each town were forced to combine their areas by the order of Adolf Hitler before the 1936 Winter Olympic Games. You can even visit the “Great Olympic Hill” in Garmisch-Partenkirchen, that hosted the ski jumping event, and held the start and finish lines of the cross country skiing competitions. The ski jump is still in use every year as part of a world cup competition on the first of January, The Four Hills Tournament. 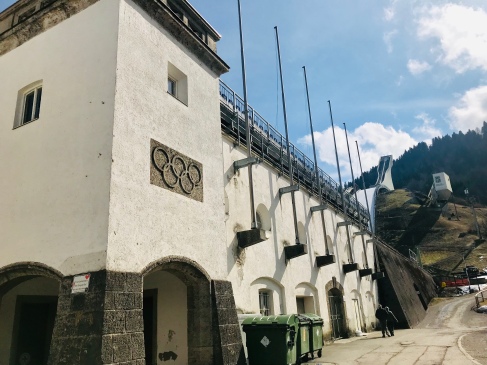 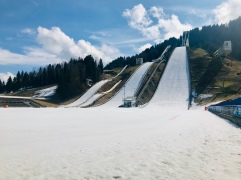 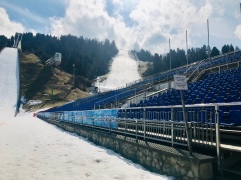 Prior to joining, both towns had seen terrible hardship over the years. A swamp-like valley floor made growing crops difficult, and many farmers in the area routinely lost their livestock to bears, wolves, and lynx. The people also suffered through several bouts of the bubonic plague, which, combined with the crop failures, led to a series of witch hunts around the 1500s.

If the historical side of this town interests you, it’s worth staying near or in Partenkirchen. Here you’ll find traditional houses, and old cobbled streets that easily transport you back in time.

Things To See and Do

Garmisch-Partenkirchen is a main hub for skiers and hikers, given the wealth of mountains that surround the town – so if you’re into the outdoors, this is the perfect place for you! Some of the main points of interest include:

The Zugspitze – Germany’s highest peak, near the village of Grainau to the south of Garmisch.

Mount Wank – A fantastic hike with a view over the whole of Garmisch-Partenkirchen. For more on this hike, click here!

Partnach Gorge (Partnachklamm) – where the Partnach river has carved a stunning route through a 2km long gap. You can purchase tickets (€6 per adult) to walk through the gorge via a walkway between the limestone cliffs. For more on this or if you fancy visiting the gorge – see my post here! 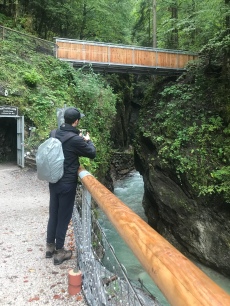 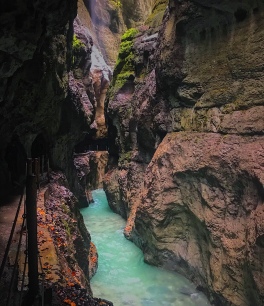 Eibsee – a stunning a lake that’s around a 40 min bus ride from Garmisch-Partenkirchen (€4.80 each way). There’s a beautiful hike round the lake which lies at the base of the Zugspitze, and the water here is like the water you’d see in the Caribbean!

Werdenfels Castle – a ruined castle that was in use until 1632 and was the site where many of those accused of witch craft were held, tried, and executed. It was almost fully torn down in the 1750s after its abandonment due to the frightening superstitions surrounding it.

Ludwigstrasse – Partenkirchen’s main street! A stroll along here cannot be missed. It will transport you back in time and there are some lovely shops, cafes, and traditional Bavarian beer houses to stop at for some grub or to enjoy a drink. 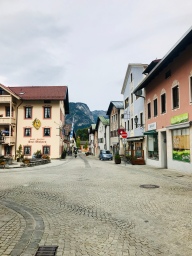 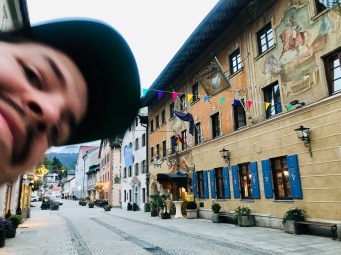 Garmisch-Partenkirchen has a huge choice of places to stay, from hotels and B&Bs to apartments and private residences offering rooms. I’d recommend booking as far in advance as you can no matter the time of year (summer is popular with hikers, then you have a price increase with most places in the winter with ski season starting). Riley and I have found excellent places to stay on AirBnB on both occasions. The place we stayed at in the Partenkirchen area this year was super cosy, the owner was very friendly, and it was near all the walks we wanted to go on.

Most places you’ll stay in Garmisch-Partenkirchen will also offer you a GaPa card (visitor’s card). This card allows you small discounts on local attractions (like the Partnach Gorge) and gets you free public transport!

Tip: If you’re in the Garmisch part of town looking for a place to eat – our absolute favourite place to go is Andiamo Burger-Grill and Pizzeria. It has always been quiet when we’ve visited, and Monday’s are half price pizza night – which is incredible value as the pizzas are huge! They also do burger deals on a Wednesday, there’s a wealth of food on the menu, and the staff are super friendly. Combined with an all round chilled out atmosphere, it’s a great place to unwind after a day exploring.

So far, we haven’t found a place that’s ticked as many boxes for a refreshing alpine getaway as Garmisch-Partenkirchen, and I’m sure we’ll return here for years to come!