If you want a personal, more rewarding, and worthwhile experience with wildlife or animals when you’re travelling, then my big tip for you would be: don’t go to the zoo. Instead, find a smaller wildlife park or sanctuary – the further away from large tourist spots the better. I can guarantee you that not only will it be cheaper to get in, but you’ll have a far more interactive experience with the animals, get to see them up close without your wallet being exploited, and there will be smaller crowds, so you can enjoy the animals in a much more relaxed environment. Most of the time, the animals look massively happier too.

Riley and I always pick going to quieter, lesser known parks to see animals on our travels. We’ve been to a fair few zoos together so can confidently say which we’ve had a better time at. I apologise in advance for the bird spam. The cockatoos on this visit really stole my heart, and I didn’t realise until after, that I didn’t take many photos of the other creatures!

These wildlife parks rely on admission fees for the upkeep of the place and animals (but still charge usually half of what your mainstream zoo would) and often do vitally important conservation work which needs to be more recognised. There’s no money grabbing, just really knowledgeable, friendly keepers that want to share the animals with you and create awareness of their situation in the wild. 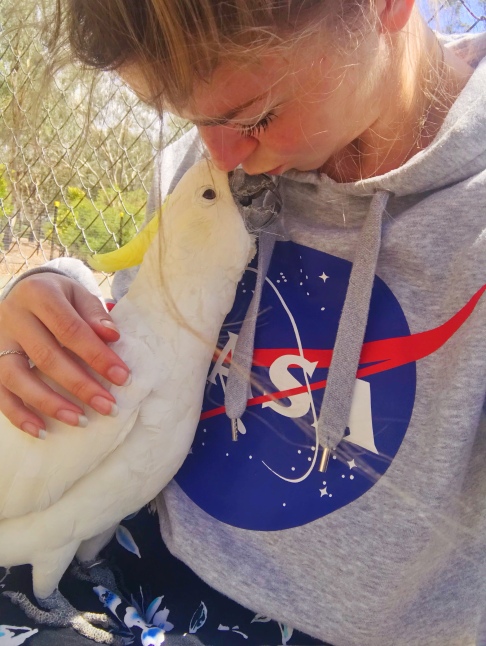 Kisses from the residents.

We found Kyabram Fauna Park to be exactly of the above. Even though we arrived in the middle of a rainstorm, we knew we were going to have a fantastic afternoon. Kyabram first opened in 1976 with two roos and an emu and has since grown tremendously without losing its charm and becoming too mainstream. They have been involved in breeding and captive management programs for many animals, including the eastern barred bandicoot, koalas, brolga, pied geese, Cape Barren geese, alpine dingo, bush stone-curlew and Tasmanian devil. Staff and volunteers have also worked extensively on the wetlands of the park, creating a range of habitats for a variety of species.

Entry was only $20 per adult and the park is home to around 600 native Australian animals including koalas, dingoes, kangaroos, wombats, wallabies, echidna, emus, flying foxes and rather friendly cockatoos! There’s free ranging animals, a reptile house, and invertebrate exhibition as well as a cafe, gift shop, and childrens play area. The few visitors that had made it there the day we went were interacting with a beautiful black-headed python, scorpion, and Bearded dragon in the cafe when we arrived. One of the keepers, Ben, had kindly brought them up for everyone to see as not many felt like venturing out in the rain. We chatted with Ben while Cleo the python wrapped herself around my neck and rather comically investigated my bag.

The rain soon went off and Ben immediately offered to take us into the koala enclosure to meet one of the residents (an experience that would normally have cost you around $30). We went in the small group of seven of us – almost everyone that was in the cafe at the time – to meet a characteristically sleepy Koala named Kay. Due to Victorian state law, you’re not allowed to hold Koalas, or touch certain body parts – hence why Riley and I drove across the border to South Australia a few weeks ago to have the holding experience at Gorge Wildlife Park. Ben was super relaxed and let us get up close to Kay who was doing his best to ignore the people now surrounding him and continue sleeping. However when the others left, he did wake up momentarily to touch noses with Riley, which was rather cute. 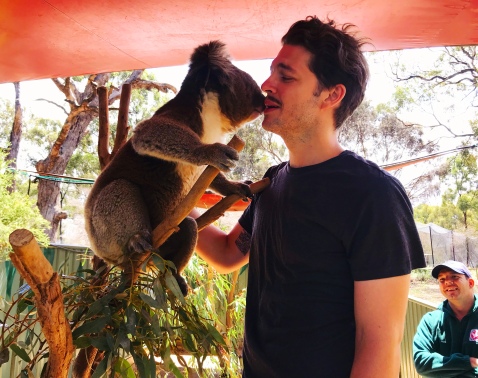 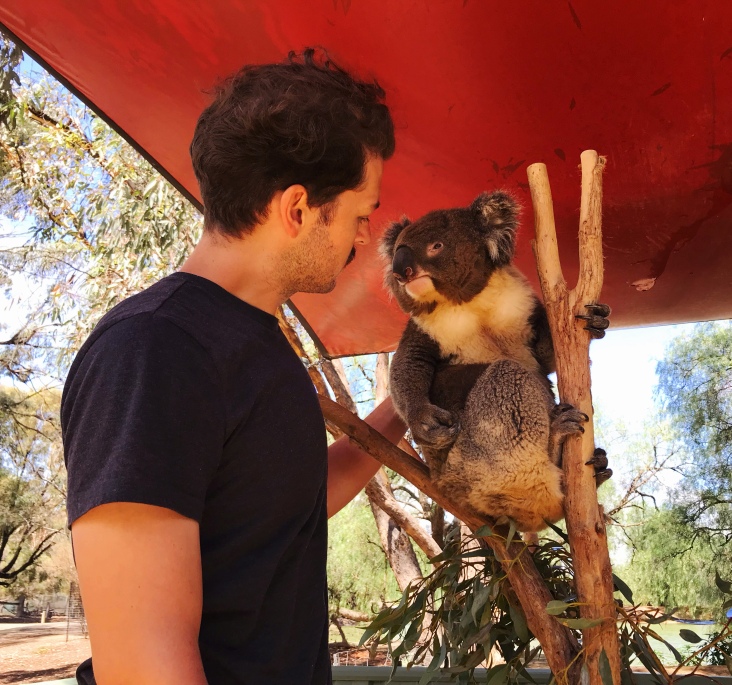 Ben was so informative and enthusiastic about the animals in his care and didn’t mind at all that we asked loads of questions. He even kindly gave me a small bag of almonds for the resident cockatoo when he heard how into parrots I was. As a result, the next stop was the parrot enclosure, that housed a number of cockatoos, galahs and rainbow lorikeets, as well as some smaller wild species that entered and left as they pleased through the mesh of the enclosure. 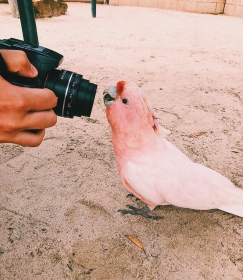 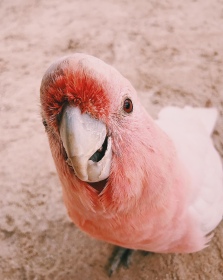 One cockatoo in particular however was waiting patiently at the door for the next visitor. It became quite apparent that she knew what was happening and immediately started unzipping and going through my handbag looking for snacks. I managed to persuade her momentarily that the almonds I had were much better, so we became friends and she offered some kisses in return. Her more reserved friend, a beautifully pink Major Mitchell’s cockatoo, walked about the ground, quietly demanding almonds with little chirps. 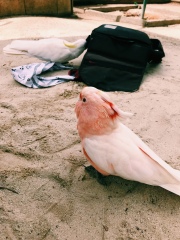 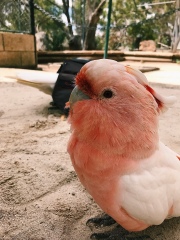 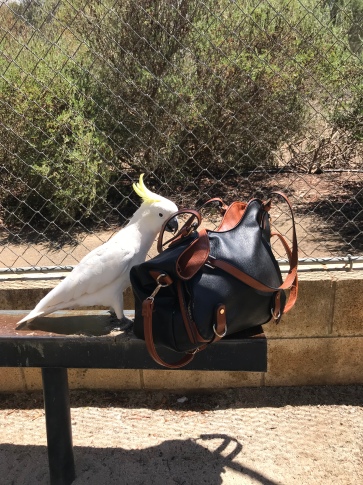 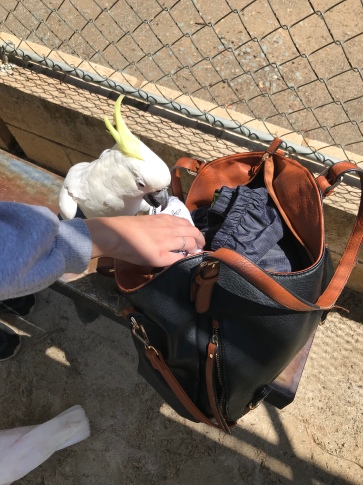 Our friendship did not last, however. She preferred rummaging through my handbag and became quite irritated when I moved it to outside the enclosure, out of reach from her sharp beak that had begun ripping bits off. Riley was her new best friend after that.

We had a wander round the rest of the park, saw some shy dingoes, roos, a sleepy quoll and wombat, many more birds, a crocodile, and some unusually active flying foxes that were fascinating to watch – to name but a few creatures. The only thing we missed was the little echidna who was hiding away due to the day’s temperature drop. Of course, we went back for some more parrot time before we left and well, let’s just say – I thought I had lost my boyfriend. 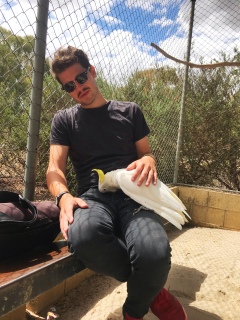 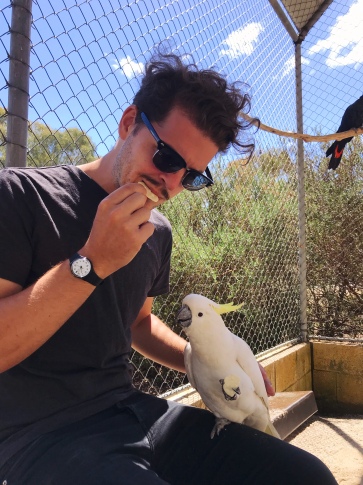 As usual, Riley and I had a fantastic afternoon at another one of these great little parks. You can find out more about the great conservation work that Kyabram does on their website here, and remember to consider visiting parks like these, who don’t see many visitors but rely on your custom and support to continue with the great work that they do. You’re guaranteed to have a wonderfully personal experience and learn heaps!