If you’ve got $10 to incinerate and you’re around the Macedon Ranges in Victoria, Australia – then visiting Hanging Rock is an ideal place to go. Usually I’m all about sharing my positive experiences at places on this blog and that’s largely because I’ve been fortunate enough to have many good experiences while travelling. However I aim to have a level of honesty, too, so this is an account of our time visiting Hanging Rock, and what we did to turn what was going to be a largely disappointing experience into an exciting one.

The racecourse that surrounds the rock.

The idea for this trip started on the plane over to Australia about a month and a half earlier when I watched the TV series Picnic at Hanging Rock on the flight, based on the 1967 novel by Joan Lindsey. It captured the mysteriousness of this 6.25 million year old rock formation, shrouding it in supernatural qualities and unexplained incidents. I was immediately attracted to its story and the accounts of people’s watches stopping and electronic devices oddly malfunctioning. The rock, which is a former volcano, was also a sacred Aboriginal site, and the Aboriginals who called the place home deeply respected its seemingly mystical properties.

We drove to Hanging Rock on a beautifully calm, sunny day, so imagine our surprise when on arrival, there is a sign at the gate saying the summit walk is closed due to high winds. Well, we didn’t drive all that way for nothing, so we entered the park grounds and paid the $10 fee, thinking surely there must be something else to see if they can still charge us when the walk is closed.

Hanging Rock’s odd formations are not particularly easy to see from the grounds, however what we could see at the top of the rock when we parked up was a lot of unmoving trees – funny how the trail to the summit was closed off then, in the interest of public safety, due to these so-called ‘strong winds.’

We did have our own picnic at Hanging Rock, however, while we decided on what to do with our afternoon there. The base walk was still open, so we agreed to venture around that and see if there was another way up to the top, avoiding the barricade that was blocking the entrance to the summit walk, patrolled by a park ranger.

We found several tracks leading up to the beginning of the rock formations on the base walk, so I followed Riley along the small tracks through the bush, not trusting myself not to step on a snake or through a spider web. We encountered the odd skink and rock wallaby on our ascent through the undergrowth but we both soon realised that the most interesting formations on display, were only accessible from the barricaded summit entrance. 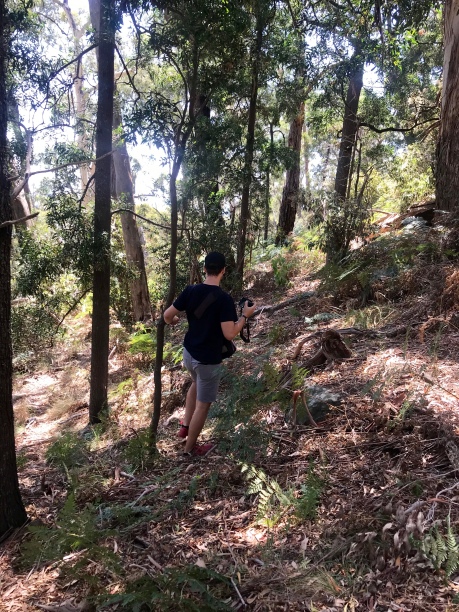 Finishing our base walk, and a little bummed about how little we’d gotten to see, we headed round to the cafe to ask about the real reason for the path closure. The man working in the cafe, unfortunately, couldn’t shed any more light on the matter. He said the park rangers go up every morning to the summit and if they deem it too windy that day, they close it off. He hadn’t been given any other reason for the closure.

Ultimately, we decided the reason given was not good enough to stop us from firstly having a good time and secondly from seeing the only thing we had come all that way to see.

We waited until the park ranger had pulled away round a corner in her white pick-up, and clambered over the barricade. In hindsight, I was not appropriately dressed for sneaking around in prohibited areas as I was wearing an electric blue dress, and as we ran up the path, the park ranger caught sight of us and raced back in her car, beeping the horn. She rolled her window down and shouted up to us in her best authoritative tone, “Excuse me! You’re not supposed to go up there!” Ignoring this warning, we scampered up the path and lost sight of her through the trees.

We had an hour until the park closed and according to the signs the rock summit was a 50 minute walk, so we felt the need to hurry. With a fresh surge of adrenaline, however, and a new sense of urgency – we made it to the summit in ten minutes flat. This left plenty of time to explore Hanging Rock, which we now had all to ourselves.

We saw Morgan’s Blood Waterfall, a largely dry rock with some dark charcoal stains on it, the hanging rock itself that was wedged between other boulders (or is Riley really just that strong?) and an engraving by a T. Scott in 1866. Other than that, there was just a bunch of interesting shaped rocks and caverns, and an okay view over the surrounding plains.

One thing that wasn’t there, though, was a strong wind. In fact, there was no wind at all. I felt bad for the other people that arrived that day and didn’t have the courage to ignore the barricade. There wasn’t a huge amount to see at the summit, or on the way up for that matter, but it felt unfair that people were being charged an entry fee and restricted from going up for no apparent reason. If there was strong winds in the morning, then a review of the situation could have been made given the blatantly obvious change in weather circumstances.

As for the general feel of the place, I wasn’t as spooked as I’d expected to be. I love immersing myself in all a destination has to offer, especially one so coated in mystery and legend. The whole formation, however, seemed to have lost its allure. I can imagine a time where Hanging Rock was enigmatic enough to inspire a mystery novel and even powerful enough to become a point of great significance, and of significance for the Aboriginals who resided there. Unfortunately, due to the interference of those looking to make the area a bustling tourist spot, Hanging Rock seems to have lost its magic.

We were last to leave the park, ten minutes before it closed at 5pm. The park ranger didn’t care to bother us as we passed by on leaving. I was glad to have seen Hanging Rock, moreso with the added excitement of climbing into a restricted area and getting caught. I’ve seen some beautiful places on my travels, most of which have been maintained enough to allow the public to explore an area safely or find the best view point. In my opinion, the best are always those that are left for you to find yourself. However, I feel Hanging Rock is now a classic example of over-maintenance and exploitation of its historical and natural significance. It’s become another tourist trap – its presence, quite frankly, smothered by gentrification.