Hot Air Ballooning is something I feel everyone should do once, if they can. There’s nothing quite like the childish excitement and wonder that stirs inside you, standing in a field at 5am watching balloons inflate to enormous proportions all around you. It’s a different feeling again when you gently drift into the sky, and float off in a colourful congregation.

Not only was the balloon ride in itself an experience, but I enjoyed the whole set up and pack away that all passengers were encouraged to be involved in. I learned heaps about things that had never really crossed my mind, and it made for an altogether memorable birthday experience for Riley’s sister’s 21st! 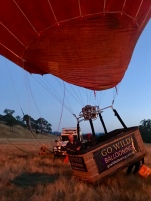 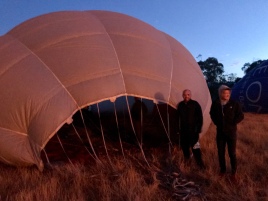 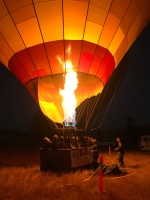 The day started at 4am (for me, since I usually take my time getting ready) but also so we could be up in the air as the sun rose, and avoid the heat of the day. We were only staying a short while away from where we were to meet our Go Wild Ballooning contact, Zac, at 5am – so we had plenty of time to find our way there. On leaving the property at which we were staying, we had several close encounters with the local wildlife which ensured we were all properly awake. A wombat running as fast as its legs could carry it shot in front of the car, closely followed by a group of startled roos that couldn’t quite make it sensibly off the driveway. As comical as the scene was, we had to take our time after that to avoid any collisions.

Processed with VSCO with p5 preset 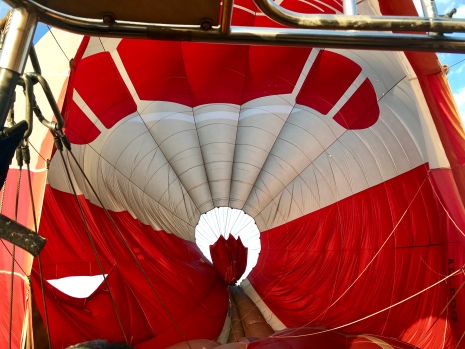 We arrived at our meeting point, and Zac explained to us what was going to happen as he let off a tiny balloon with a flashing beacon attached. This was to determine the direction of the wind so we knew where to go for our landing site in order to drift back to our base. This, I learned, does not always go to plan. Zac was superb, he kept the mood light hearted, and had a great sense of humour. We then got into a jeep, driven by our Australian pilot – who, turns out, descends from the same Scottish clan as I do! It’s a small world we live in. Zac accompanied us on the ten minute drive to the take off location, and was there to help set up, then meet us at our landing point. We arrived at our take off field to find it already full of other balloons. It was quite a magnificent sight.

There was around eight or so balloons of varying sizes from different companies there, and we were allowed to help set up the balloon and basket for our trip. You could feel the excitement in the air as the sky lightened, and gradually one by one, the deafening burners were lit in each balloon. Slowly, they inflated, rising up until they were standing. Then we climbed into the basket and ran through our flight safety briefing. There was ten of us in the basket, but we could still comfortably squat in our brace landing positions without feeling too claustrophobic. We’d have to resume this stance again about ten seconds before we touched down again.

If take off was anything to go by however, I struggled to see why we’d need to brace for landing. We drifted off the ground, as gently as a feather would, being cast upwards by the breeze.

It was quite something to be 2000 feet in the air, drifting along with the other balloons, like something out of a Bob Ross painting, watching the sun rise over the nearest mountain range.

Processed with VSCO with m5 preset

Processed with VSCO with m5 preset

Our Pilot, Mark, was extremely informative. He explained things and answered any questions we had, as he expertly flew us towards our landing spot about an hour away. This was in between lighting the burner above our heads in order to increase our altitude as we needed, and turning the balloon so we could all enjoy the surrounding scenery. 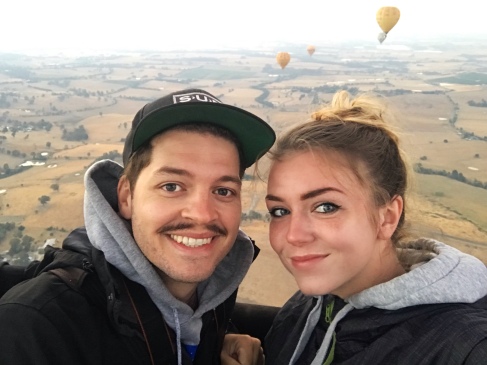 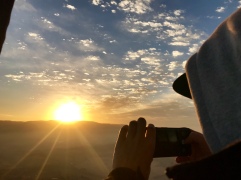 As we came into land, it became apparent that not all the balloons would be landing in the same field. We were all quite fortunate to land in the same area though for our vehicles to come and get us and our balloon. Zac was awaiting our arrival and as we floated closer to the ground, we assumed our landing positions. I was marginally concerned about my dodgy knee as it doesn’t deal well with impact or twisting thanks to an old dislocation and rupture of my ACL, however I needn’t have worried. The landing couldn’t have been any softer. In fact if you had closed your eyes, you wouldn’t have been able to tell we’d even landed. Mark told us to brace ourselves as a joke, I’m sure, as we were all first time flyers. 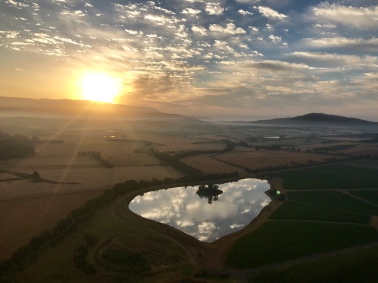 Packing the balloon away was also fun (who would have thought it)! Everyone had a job they could do, it was a good laugh, and I was mighty impressed that so much material could be rolled up into one bag on the back of the trailer. 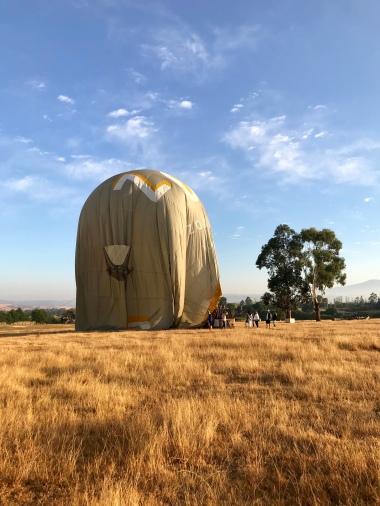 Overall, a very fun, and highly recommendable morning out, that was well worth the early start to see the sun rise in an entirely new way. And we were back in town all before 9am, so still had the whole day ahead of us. Getting up early is great sometimes. 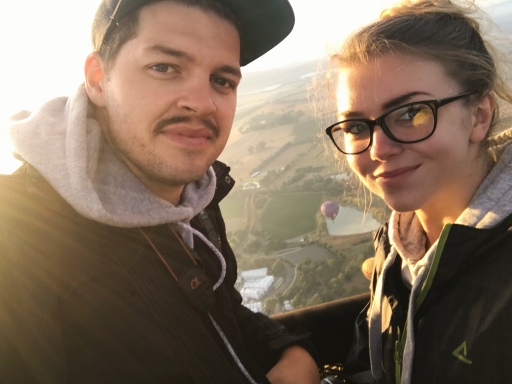