A trip to Australia can’t be complete without being bitten by something vaguely deadly. Given the fact I’d been getting eaten alive by mosquitoes and ants and various other biting insects since going on our camping trip, I knew it was only a matter of time before I was munched on by something more sinister. As I left for Australia – given my past track records with accidents and injuries – I thought that if anyone’s going to get bitten by a snake or a spider out there, it’s likely going to be me.

Cue my utter lack of surprise then, when I woke up on our last morning in Byron Bay, left foot in varying degrees of pain, with a couple of large red lumps on my skin that weren’t there when I went to sleep. Not only that, but a similar bite had appeared on my right ankle, causing some mild joint pain when I moved it.

So kudos to the spider that got me not once but three times, it appeared, and got away with it – there was no sign of the bugger anywhere when I got up.

Given the different reaction I’d had to the bites (and believe me, I’d had enough over the past few weeks to know), Riley and I had come to the conclusion it would most likely be a spider bite and not one of the usual flying culprits. Other than being a little light headed, which was more likely from the heat that day, I felt otherwise okay so we decided to continue on with our plans that day, pack up and head on to Noosa.

I wasn’t worried about it in the slightest, given the pain was bearable, my foot wasn’t turning black and I could still breathe, the spider couldn’t have been poisonous and I’d most likely just had a bad reaction to it. So we arrived in Noosa after a three and a half hour drive, set up camp and hit the beach for a couple of hours before the sun went down. The pain, however, wasn’t getting any better. In fact, the bite marks had swollen a bit and become more red, and I was finding it mildly more uncomfortable to walk. The antihistamine I had taken earlier for it had had no effect, and I was avoiding taking any painkillers (like I usually do) so I could monitor the pain. 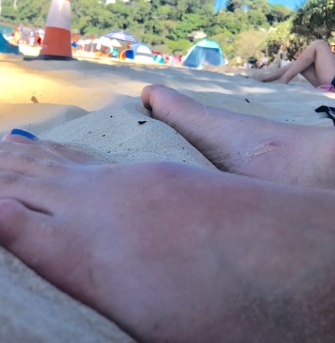 The day the bites happened.

We went to dinner at a nice burger place and I put it to the back of my mind for awhile until we got up to leave and my left foot had simply ballooned. It was barely squeezing into my flip flop after the space of only a few hours sitting down. The pain had escalated from mild to moderate and the skin around the bites was now looking very angry. Walking was difficult. I pretty much hobbled out the restaurant, my foot feeling like it was going to burst each time I put weight on it. The bite on my right ankle had also caused my joint to swell to the same effect and bending it was hard. It was late when we made our way back to the campsite, Riley strongly suggested we go to the hospital, however I was tired and decided I’d survived this long with the bites, another night wasn’t going to kill me and we’d go in the morning and get it checked out. 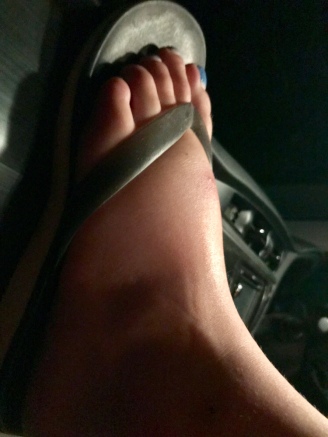 Now I’ve spent a fair amount of time in the emergency room with various horsey accidents ,so getting to sample an emergency department Down Under was good fun. I had braced myself for at least a 4 hour wait as we pulled into Nambour General, since that was about the average I was used to waiting back home. My foot was getting progressively more painful to walk on, and the swelling had not gone down at all. This make me think it was the right decision to go and get it looked at, even if it wasn’t a venomous bite and I’d just taken a bad reaction – it meant they would at least be able to give me something for the swelling to make moving around more comfortable so we could continue enjoying our road trip.

Let me tell you, I was mega impressed by the staff and general organisation of the place. I never generally feel comfortable in hospitals after a few bad experiences in the UK with misdiagnoses and general lack of care – but Nambour had me sorted and reassured from the offset. They were sympathetic (none of the hardened professional indifference I’d experienced in the past), and even checked my foot over before asking me to take a seat (probably protocol for a bite of any kind over here). I was assured that due to the affiliation of Australia’s healthcare system, Medicare, with the NHS back home in the UK, my treatment would be taken care of without having to involve my insurance company.

On route to hospital with the swelling at its worst.

The waiting room was quiet, a couple of other patients were seated there but I was to my pleasant surprise, taken within 10 mins of being seated. Riley didn’t even have time to go out and move the car before I was taken back to be seen to by the nurses. I’ve been told this is typical of a country hospital but this still beat country hospital waiting times back home by a long shot! A nurse saw him looking lost and showed him through to the cubicle I was in, where I was seen to by a very friendly and efficient nurse. All the regular checks were made, blood pressure, heart rate, etc., with everything thankfully coming back normal.

She had a good look at and feel of my feet before giving me a stronger antihistamine than the one I had been taking and a round of steroids. These were to reduce the inflammation and I was given a prescription (which was the only thing I had to pay for, costing $15) to pick up from a pharmacy, along with a note for a GP in case it wasn’t improving and I needed more steroids after the three-day prescription. I felt super looked after, as the staff weren’t worked off their feet and could take time with their patients. I certainly didn’t feel rushed in any way, and I was given clear instructions about icing and elevating my foot in the meantime.

The steroids worked their magic and I didn’t need another course after taking them for three days. The swelling had gone down dramatically over the first 24 hours and all I was left with was a discolouration around the bite area which has since faded further into my tan.

All in all, my experience of getting bitten by a spider in Australia actually turned out to be a positive one. It’s better to get things checked out than leave them (you could end up with a bacterial infection even if the bite isn’t serious) and if you’re from the UK then don’t panic about insurance – you should be covered by Australia’s Medicare. Just don’t forget your bug spray if you’re going camping, and always check your shoes and sleeping bag before you get in at night. That said, you can be super careful and still get bitten (take paranoid me as an example) so don’t let the insects and the biting things put you off enjoying yourself or even coming to this amazing country in the first place. They certainly haven’t been as bad as I anticipated, anyway! 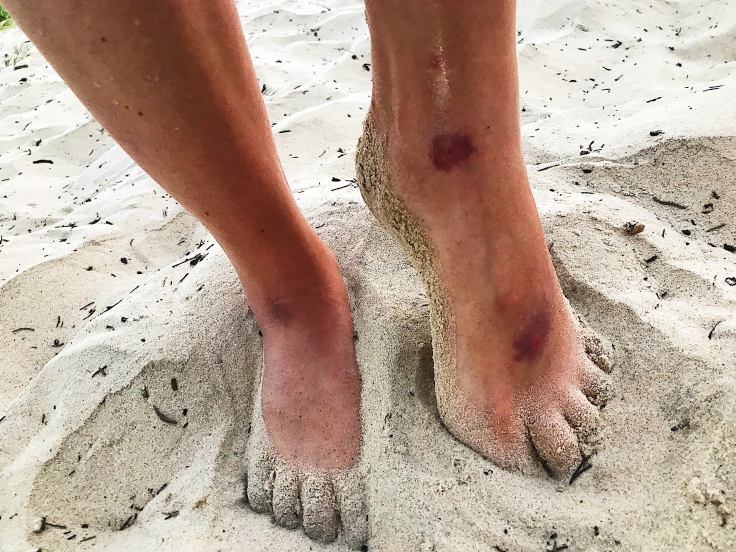