While spending the night in an unmanned settler’s hut from 1903 (the original owner of which didn’t return home one night after perishing in the surrounding forests) wasn’t high on my to-do list for 2018, Riley and I somehow ended up on the dead man’s doorstep.

With the darkness drawing in, we had been on the road all day, most of it off sealed roads (sorry to our little Toyota Corolla). Our chosen campsite wasn’t looking good either – set in Namadgi National Park, we feared it would be a stretch too far down an unforgiving single track for our city vehicle. With the time we were making, the idea of setting up a tent in the dark appealed to neither me nor Riley. That was when Brayshaw’s Hut appeared out of the trees, set rather innocently in a clearing, surrounded by kangaroos and a few inquisitive wallabies. We pulled up in the car, intending only to check it out briefly before continuing on our way – however, the allure of the little dwelling and its story (and weariness from travelling) would later cause us to stay.

The notice board revealed that the hut once belonged to a man named David Brayshaw. This was very interesting – let me tell you about Mr Brayshaw, who came to a tragic end not far from his hut. His pad was built for him in 1903, most likely by his brother Edward who was a fine carpenter, and made from materials sourced from the surrounding land. Its one of only two remaining timber slab and shingle buildings in the national park.

Brayshaw lived in this little two-room shack for 28 years, which was a lonely existence as he never married or raised a family. There was a shortage of women in the area back then compared to men so this was a common occurrence for blokes living in remote farming districts.

Poor old Brayshaw needn’t have worried who was going to care for him in his old age however, as in August 1931 his life came to a tragic end at the age of 79. He was riding home from his brother’s crib in a nearby village when something went wrong. Its unclear what prompted the incident, but Brayshaw never made it home that night and two days later his horse was found, minus its rider. Brayshaw wasn’t far – his body was lying on the ground, feet still in stirrup irons, hat and whip strewn across the forest floor alongside him. The cause of death was labelled exposure to the harsh conditions, and now a pile of white rocks is all that marks his final resting place in the valley.

His home has been lived in since. After his death it was taken over by his nephew and his family and then kept by another family until 1973. Many structures have come and gone over the years and in 1993, it was restored to its 1930s design by the Kosciuszko Huts Association with ACT Parks and Conservation Service. Visitors can go and view inside the cabin and read about its past on site.

Old newspapers that had been used as wallpaper. 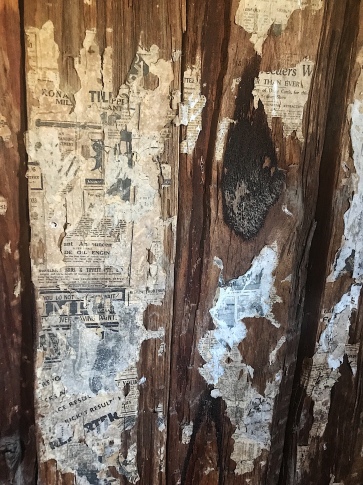 So now you know the background of the hut’s owner and its history, let me tell you about our night spent in Hotel de la Brayshaw. Firstly, I took a lot of persuading. This, I’m sure, mainly comes from having watched way more horror films than Riley. I know what happens to the couple that go out into the woods, find a spooky cabin and decide to stay the night. They get murdered. Horribly. At the very least, there’s bound to be spooky noises and unnatural goings on! Media aside, we were in the middle of nowhere and the hut was in no way secure. We couldn’t lock the doors, it was very accessible from the outside, there was gaps in the planks that made up the floor, roof and walls and I was well aware there could be other hikers passing through that may stumble across the place and get the same idea as us.

All this wasn’t made any easier to swallow due to the fact earlier in the day, we had picked up a hitchhiker named Bruno. Bruno, who I’m sure is a genuinely nice guy, had been hiking for 4 days by himself, with only a tiny flask of water for fluids that he was filling up in streams as he went, and he still had something like 6 days left to go until he reached his destination. A spontaneous effort he’d said after taking some time off work. He also mentioned casually while in the back of our car that he killed a snake with his machete and ate it the night before. Pretty metal dude, but it gave me food for thought. We’re spending the night in a cabin where we can’t lock the doors and there’s people like Bruno wielding machetes and hiking the forests round about us. Great.

So understandably, I wasn’t vibing the place but ever keen for a story and having a persuasive boyfriend, I was finally convinced to stay. We grabbed in the camp beds and set up in our sleeping bags in the room that was the main access point for both doors leading into the property, deciding the other room was not only creepier but less safe in that if someone came in during the night, we wouldn’t know about it. Well I would because there was no way I was ever getting any sleep in that place, I decided.

As darkness finally came upon us, we brought in some firewood and made use of the old fireplace in the main room. Riley, super chuffed with his manly endeavours, managed to get quite a warm blaze lit with little resources (cue major boyfriend points and an impressed girlfriend). With the room feeling a little more comfortable and a warm glow lighting our evening, we sat down to a picnic dinner and toasted to Mr Brayshaw for letting us stop in his hut for the night. In my slightly superstitious head, I hoped this small thanks was enough. When we started to get tired, we pulled the camp beds together in the middle of the room (facing the doors on my request) and cosied down for the night. Riley fell asleep without too much trouble after spending majority of the evening reassuring me we were perfectly safe. Still, subconsciously I was doubtful and no amount of comforting words was going to convince my deeply-rooted anxiety that this situation was safe.

Riley getting the fire started.

Minutes ticked into an hour and I found myself slowly favouring keeping my eyes off the doors in the room as the fire died down and began casting odd shapes on the wooden planks surrounding us. I didn’t want to give myself anymore excuses to stay awake and “keep watch” (the silly occupation my mind had assigned my body to) but every creak of wood or shuffle of kangaroo outside had me jolt awake again. As comforting as it was to have the presence of so much wildlife outside in the form of all the marsupials surrounding the hut, (that didn’t seem too phased by our arrival), their coughs or odd noises sounded vaguely human, each one setting my heart and imagination racing until I had reassured myself this time.

I dozed off a few times to be woken by a gust of wind creaking through the hut or a roo outside and on one occasion a bird making an ungraceful landing in the rafters. I checked my phone, haven been woken by the eighth or ninth time, thinking surely the sun won’t be long in rising, it must be nearly 6. But no. The screen read, rather disappointingly, 4:15am. Just as I put my phone back in my pocket, there was a rumble on the track where we’d left the car, a short walk from the cabin. I held my breath to listen. The rumble got louder, it sounded like a large vehicle, a big van perhaps as I couldn’t imagine a truck making it down such a rocky dirt track. This is it, I thought, someone has come to murder us. I lay quiet, and watched the headlights light up the opposite wall.

The van engine didn’t stop abruptly however like it would if it had stopped, instead the noise trailed off into the distance. Convinced it had passed but still not feeling entirely relaxed, I tried to get back to sleep for the last few hours of the night.

I couldn’t have been more glad when the sun came up and drenched the hauntingly dark hut in daylight. We made it. We survived. I was glad we did it, it had been an exciting night, I remarked. Despite my nerves, the fear of being murdered didn’t get the better of me and I managed at least a couple hours of sleep.

Then there was that familiar noise of tires on the track again. This time the engine didn’t fade off into the distance. It stopped. I nudged Riley awake, deeming this a more suitable time to seek a second opinion on a noise I’d heard.

We both got up, minorly worried we were about to have company. Sure enough, our car wasn’t the only one parked up on the verge any longer. It had been joined by a silver vehicle and a man was retrieving something from his back seat. We couldn’t see very well, so retreated back into the hut and closed the door back over. Quickly packing up our things, I checked the mans whereabouts periodically through a gap between planks of wood. He had been joined by another figure and both were making their way briskly down the track towards the hut.

They stopped to read the tourist board several metres up the hill from the door, reassuring us a little that we weren’t about to get murdered after all. Their next likely step however would be to unsuspectingly open the door to the hut to see inside, so rather than startle both parties, Riley opened the door and called out a casual “good morning!” to make our presence known. The couple looked surprised but returned the greeting none the less before asking a couple of directions and, more nervously, if we’d still be in the hut when they came back through the clearing. The answer to that was of course, no, we would not. As great an experience as sleeping over at Brayshaw’s was, Riley and I were both keen to get back on the road and a proper bed for the night was calling us in Sydney.

I wouldn’t rush to sleep in a dead settler’s hut again but if it was our only option I wouldn’t knock it, its been inhabited before after all and someone once called this place home. I just thank Mr Brayshaw for being so accommodating, wherever he is, and for not keeping us involuntarily awake all night!