Seeing the world’s wild horses in places I go has been high on my bucket list for a long time so when Riley suggested we spend New Year’s Day finding Australia’s feral equines, I couldn’t think of a better way to start 2018.

It wasn’t just that the brumbies were Australia’s wild horse population however – this fascination for the breed was sparked from an early interest in Elyne Mitchell’s Silver Brumby series. The captivating novels were recommended to me by a primary school teacher who I very much adored when I was around eleven. She knew of my fascination with horses and I greatly respected her opinion on anything, so the next week when the library van pulled up in the playground, I couldn’t wait to swap my books. I remember searching high and low for the novels, eventually resigning in desperation to ask the elderly librarian if he even had such copies. To my utter delight, he sought them out of a hidden shelf for me and I felt like I’d just received some precious gift, turning the seemingly ancient and tattered  covers over in my hands.

“Now you take good care of those won’t you?” He raised an eyebrow at the innocent eleven year old, now clutching the books to her chest.

Of course I promised I would and rushed back inside so I could spend as much that was left of reading time as I could becoming familiar with my new escape from reality. 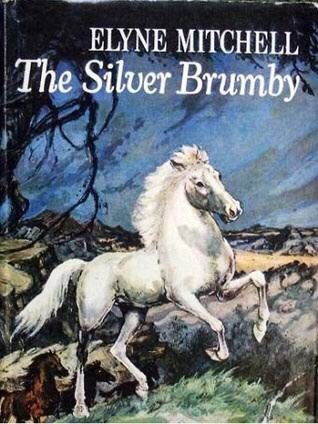 The books did not disappoint. I became completely enamoured by the stories of the silver brumby stallion Thowra and his trials and tribulations as he fought to survive in the Australian bush. So on the first day of 2018, 11 years later, with the opportunity to find the very horses that inspired Elyne Mitchell to weave such captivating tales, I set out with Riley to see a long term dream of mine come true.

And the Brumbies did not disappoint either. We were just short of the entrance to Kosiouzko National Park, heading in from Corryong where we’d spent three nights at the Nariel Creek Folk Festival with friends for New Year’s when I spotted my first one from the roadside. I had been keeping my eye out since we started heading North as some locals had tipped us off that you often see them from the car as you’re passing through. They’ve become a bit of a pest, with no natural predators to keep numbers down, Brumbies are overgrazing and causing the downfall of native plant species that the country is fighting to protect. This was encouraging news for me, however, as it meant the day long hike I had psyched myself up for to find any beasts was seeming less and less likely. So before we had even properly began our search in he national park, a flash of chestnut caught my eye, standing out amongst the greenery a short way from the roadside.

Riley, quick to react to my squeal of joy, pulled over 20 metres or so away from the spot I had saw the horse. Armed with cameras and quiet steps, we walked back along the road, far enough that I began to question my eyesight and that my imagination may have taken advantage of my excitement. But sure enough he was there, a young flame red colt, grazing by himself about ten metres in from the roadside. He was quick to spot us, a nervy chap in quite poor condition, his ribs sticking out from his contrastingly shiny chestnut coat. He spun around to face us, head held high, snorting loudly to express his fear at suddenly finding humans within his circle of comfort. Then with a toss of his head, he picked up a brisk trot in the opposite direction, stopping to check once that his admirers were not following before disappearing into the forest.

Still buzzing from our first encounter with a wild horse in Australia, our second one was far more up close and personal, as the horse that Riley spotted this time couldn’t run away from us – rigor mortis prevented it from doing so. Our second Brumby, a bay stallion by the roadside, was sadly no longer with us – but he provided an interesting up close specimen for me to admire none the less, even in death. These horses really were build to survive the harshest of climates, some more than others given the condition of the colt we had seen a short while earlier, but this stallion had a good covering on him and healthy, hard-walled hooves. His cause of death was unclear and we speculated it may have been a car, however there was no visible trauma to the corpse that would have suggested a vehicular collision. An infection perhaps? Or internal injury? It seemed unlikely to me that it would have been colic, given their hardiness, but who knows. 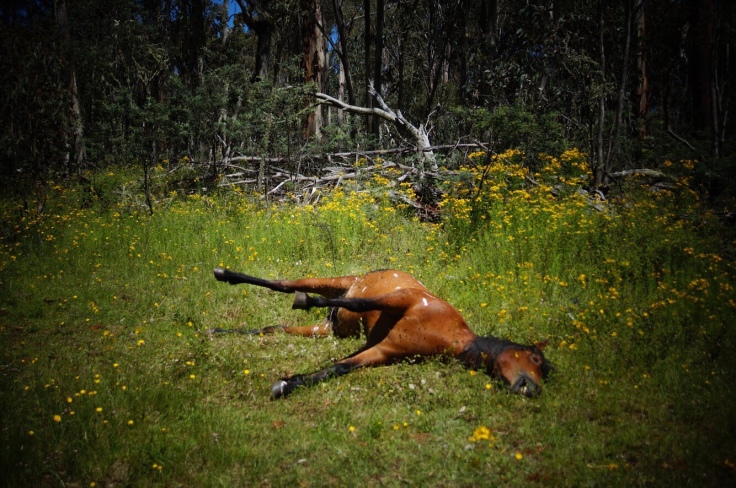 The dead horse didn’t dampen our spirits for finding more Brumbies in better condition, however. As we travelled through the impeding mountain range of Kosciusko and the trees gave way to rolling plains on the other side, we caught sight of a band of three horses, all standing a little way off each other, on the hillside. Riley pulled over once more, and we watched them from the car for a short while, taking advantage of the cover of the vehicle that they seemed to be used to seeing. A grey colt stood high on the hillside, with two almost blue roan-coloured horses, one closest to the roadside keeping watch while the the other was grazing off in the distance. Then the stallion nearest us sauntered away back towards the grey colt, who immediately displayed what horsey people call “yaking”. This is what young horses commonly present their elders with as an indication of “I’m just a baby, I don’t mean any harm” and sure enough the older stallion began pushing him around as the other dark-coloured horse approached. He then shepherded the other horse (presumably a mare) back down towards the road, away from the grey colt.

This was enough to entice me out the car and I moved off the side of the road and into the grass to see how close I could get. As it turns out, this was pretty close! I was pleasantly surprised that they allowed me to enjoy their company from even a few metres away. Having had previous experience working with young and reasonably unhandled horses, I sidled up to them slowly, keeping my body language as nonthreatening as possible and my eyes down and this proved enough for me to steal a few precious moments close enough for me to hear their gentle breaths and the swish of their tails before they turned and gracefully picked their way back up the hillside.

Brumbies are not too hard to find in and around Kosciusko National Park, and what initially started out as an adventure to chase down the wild horses of Australia fell quietly into our laps really. Either way, thank you to Elyne Mitchell for capturing these wild creatures so perfectly with your words that in turn, captured a child’s heart enough for her adult self to go out and pursue them – and to my primary teacher for introducing me to such novels. And of course to Riley for driving me out into the middle of nowhere just to see me smile with childish joy. A great start to 2018 indeed.